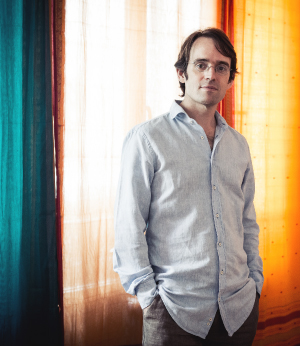 Composer of jazz and classical music

“The score’s irresistible energy seemed to come from everywhere: classical forms, jazz harmonies, and Arvo Pärt-like meditativeness, were all on tap, and the last bars were pure Romanticism.”
—The New York Times

Patrick Zimmerli is a New York- and Paris-based composer, producer, and saxophonist. His latest album, with Joshua Redman and the string quartet Brooklyn Rider, was released on Nonesuch Recordings in October 2019. This marks his third collaboration with Nonesuch, following Modern Music, his two-piano CD featuring Kevin Hays and Brad Mehldau.

Since winning the inaugural Thelonious Monk Composers’ Competition in 1993, he has written, recorded, and performed with many of the leading lights of the jazz and classical world, among them Luciana Souza, Anne Sofie von Otter, the Knights Orchestra, French pianist Thomas Enhco, flutist Jasmine Choi, and the Escher String Quartet.

The COVID crisis has forced Zimmerli online, where he is developing a VirtualVenue® technology to feature musicians from different places around the world in collaboration, using filmic techniques to give the illusion that they are playing together in the same space and time. The first project, entitled Children of Bronzeville, is of a song cycle Zimmerli wrote based on poems of Gwendolyn Brooks.

In addition he has just been awarded a commission from Opera Arizona to write a serialized opera specifically to be viewed on Cell Phones and Tablets.

Pre-COVID projects include Views of Chicago, a major multi-composition in nine parts for nine ensembles across the jazz, classical, new music, and vocal spectrums; Messages, a commission from the Seattle Commissioning Club for an evening-length work for jazz/classical chamber ensemble; and a Concerto for Flute and Jazz Percussion for Jasmine Choi, Satoshi Takeishi and the New York Classical Players. From 2016-17 Zimmerli curated the INTERSECT festival in Bryant Park in Manhattan, and developed a TV series called Now and Then juxtaposing old and new music for National Sawdust and WNET.

Specializing in large-scale projects, he has written many evening-length works and suites, including Clockworks, a Chamber Music America New Jazz Works Grant for jazz quartet, premiered at (le) Poisson Rouge and released as a CD in 2018. In 2017 he wrote an oratorio for male choir, operatic tenor, jazz percussion and piano on the work of Alan Seeger, premiered at the storied Invalides in Paris; it was reprised in Reims and at the Fondation Boghossian in Brussels, with a New York premiere with Kent Tritle slated for 2019. He also created a sitespeciﬁc piece entitled Waterfall/Gathering Pools for the Centre Pompidou in Paris with the Paris Percussion Group.

Zimmerli’s music has also been performed at Carnegie Hall and Town Hall in New York, Wigmore Hall in London, Salle Pleyel in Paris, Sala São Paolo in Brazil, the Vienna Konzerthaus Grosser Saal and the SF Jazz Center. It has been featured in MoMA’s Summergarden series, at the Guggenheim Museum, on NPR and at the Jazz Composers’ Collective, and has been recorded on the Naxos, Nonesuch (Warner), Blue Note, Arabesque, Antilles, Songlines, Jazz City, Nouvelle and Naïve labels.